One year after Daltrey's Celebration of The Who Pay-per-view event at Carnegie Hall, Roger took the act on the road to keep the music of the Who "alive". As Roger later comments at some of the shows on the tour, "some of the Carnegie treatments worked, some didn't". The problem was, the PPV set up a preconceived notion in the public mind of what the DST tour would be all about  "Daltrey, Entwistle, no Pete, and an ORCHESTRAwtf?!" Unfortunately, this kept many away from a show that was well worth seeing, and surprised and delighted almost all who did attend.

The tour began late July '94 in Denver CO, after a months delay due to a hand injury suffered by Entwistle. From the sound of things, the tour was a bit chaotic from a scheduling standpoint. Sporadic ticket sales and venue additions and changes, plus the availability of the local areas orchestras made for a less than smooth traverse of the US and Canada. John Entwistle nicknamed it "The Gum Ball Tour" because "At the moment we're zigzagging all over the place, like a table-tennis ball in a wind tunnel."

Ticket sales were sluggish. Some advanced promotion (of which there was almost nil) might have helped. Or maybe the idea of an "almost-Who" (no Pete) was not appealing to ordinary oo fans. More likely it was a mistaken belief that it was simply a road show of the Pay Per View that kept people away. In reality, it was a very strong rocking set, that seemed to surprise and delight almost every reviewer. The majority of reviews labeled the shows as "not to be missed" or "you shoulda been there!" - full of high praise for Daltreys energy, Entwistle's fingers, Zaks precise power and Simons harmonies.

There was an initial itinerary with dates as early as May 19th. One city on that itinerary that did not make the second draft was Milwaukee (orig date 7/20 - Marcus Amphitheater). The tour DID finally kick off on July 30th at Red Rocks. If you can confirm or deny any of the dates, please let me know! 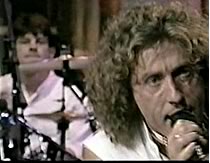 Aug 02, 1994 - The Tonight Show with Jay Leno - The full band and partial orchestra perform "You Better You Bet". Afterwards, Roger joined Don Rickles over on the couch to chat with Leno!

The tour seems to get put on hold following the Oct '94 gig. Exactly why is still unclear. During the lull, fellow band members Simon, Zak, Phil & Peter form Animal Soup in Jan of '95, and perform live in the London pub circuit during March & April. Apparently still on hold, Zak and John Entwistle found time to join up with the 3rd Ringo All-Starr tour for the summer. It had been announce way back in Feb of '95, that, billed as "Daltrey and Friends", they would appear (3rd billing to The Cure & Simple Minds) Sunday 25th June 1995, on the "Main Stage" at the 25th Anniversary Glastonbury Festival 1995, UK. Their appearance was later canceled (and the date would have conflicted with the Ringo tour).


The DST band did finally regroup and appeared at the Who Convention at the Bottom Line. Definite plans were in the works for the Tour to pick up where it had left off, as the convention program contains the 1995 planned itinerary of the DST band.       Full details, setlist, and program booklet!

1995 Planned dates which did not take place:

The Who Convention program goes on to say that UK dates were soon to be announced. There was talk of dates in Japan, and a return to the US. Roger and Simon even spent time in Australia to promote the planned shows there, but eventually the entire tour was scrapped.

Though poor ticket sales was probably the main cause of some of the tour's cancellations, but I recall reading something vaguely referring to "Rogers stomach problems" as an added incentive to its being put on hold. Im trying to track that down to verify.

|back to Zak with  Daltrey Sings Townshend |