Are You Good at Crosswords?

Try your hand at this crossword puzzle designed by Zak!
It can be found in the 1985 book:
The Language Of Rock N Roll, by Bob Young & Micky Moody
The small but not Insignificant Crossword: Compiled by Zak Starkey

Need to check your answers? (or just cheat?)
Return to Language of Rock & Roll

The answers are from The 1995 Christmas Jeopardy episode:

Again The Ever Popular Subject of Trivia 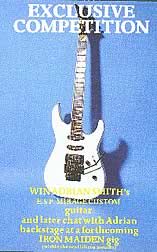 This time it's an "Exclusive Competition" card that came with the A.S.a.P single (UK) of "Down The Wire". The prize was Adrian Smith's E.S.P Mirage Custom guitar, and a later chat with Adrian backstage at an upcoming Iron Maiden gig. To win, one had to correctly answer three questions:


Also required was a "tie breaking slogan in the most original and appropriate fashion, in not more than 10 additional words: I Should Win Adrian's Guitar Because - - -". Deadline for entry was May 1, 1990 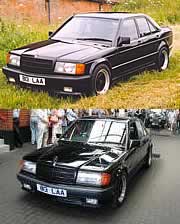 Zak's 1984 Mercedes-Benz AMG 190 E2.3 hand-me-down was auctioned at BCA's Classic & Historic sale on July 31, 2004. The car was personally imported to the UK in 1984 by the first owner Mr. Richard Starkey who also ordered the £10,000 conversion to AMG wide-body specification. [Done by Strattons Ltd; a full AMG body kit, steering wheel, colour keyed alloy wheels and grille, lowered suspension, exhaust system and an AMG 2.3-litre engine upgrade]. In 1989 registration was transferred to Lornington Ltd., (Mr. Starkey's Company), and then to Barbara (Bach) Starkey and finally to owner at time of auction, Zak Starkey.
The catalogue estimate was £5,000. It sold for £8,550 following some highly competitive bidding.

In the premiere issue (#1, Oct/Nov 2004) of GIANT Magazine, there is an article about fanatical collectors [The Collectors, by Kirk Miller, pg 130].

One of the collectors profiled is Peter Lavinger, drumstick collector extreme. When a portion of his stick collection was displayed at The Rock and Roll Hall of Fame in Cleveland (display seen in article photo left), Zak's personally signed sticks were included.

In the GIANT article he gave high praise to Zak's drumming:
Highlights: If you're a classic rock fan, Lavinger has hard-to-get wares from Ringo Starr; Ringo's son Zak Starkey, who currently plays with the Who ("Best drummer today," says Lavinger); ...

Q: Why do drummers always leave drum sticks on the dashboards of their cars?
A: So they can park in the Handicapped spaces.
Q: What do Ginger Baker and Seven-Eleven coffee have in common?
A: They both suck without Cream!
Q: How many drummers does it take to screw in a lightbulb?
A: Twenty. One to hold the light bulb, and 19 to drink until the room spins.
-or-
A: Two. One to screw in the bulb, the other to tell him how Neil Peart would have done it better.

Interesting Links of all kinds!!!