Zak's early bands did quite a bit of playing in the local pub circuit If you caught any of the incarnations, please let us know! 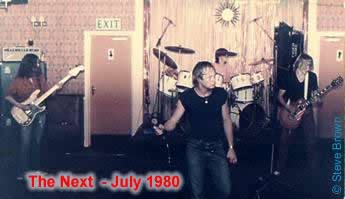 This line up - Geoff Seaton, Graham Seaton, Kerry Benford and Zak Starkey - were able to occasionally make use of 'The Lodge' at Tittenhurst for rehearsals. The band often appeared at The Bridge House, in Bracknell, performing original rock tunes, and some covers
band details

The Next changed their name to Dead Meat in 1980, as well as adding a second guitarist - Roger Lewis. Again, their regular haunt was The Bridge House in Bracknell. band details 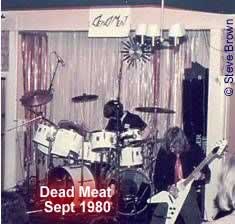 Late in 1980, Zak, Kerry and Roger left Dead Meat and went back to temporarily calling themselves The Next. They also added keyboardist Martin Jowers. In April of 1981, they finally found their lead singer, Ian Parry.

Again, this line up was able to rehearse most of the time at 'The Lodge' on the grounds of Tittenhurst. The band's regular gig venue again was The Bridge House in Bracknell, but they did venture to other pubs, band showcases and even a benefit concert in Morocco for The Moroccan Cancer Fund. Other locations included The Electric Stadium - Chadwell Heath; The Cannon - Ascot; The Wagon & Horses - Ickenham; The Horse & Groom - Ascot; Marquee - Wardour St; Dingwalls - London; Charters School - Ascot. Again they performed mostly originals, but a few covers like Hey Joe, Crossroads, Redhouse and "a brilliant version of Summertime" (all usually sung by Roger) made their way into the sets. Over the years, not too many press photos of Zak playing live with Monopacific seem to exist. Maybe that's because when photographers concentrated too much on his presence, and tried to get a closer shot, he'd let a stick fly from the high hat. He is said to have been a prolific shot!!!
band details 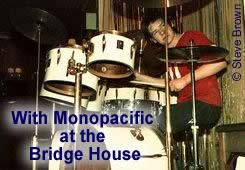 Thanks to former roadie "Bolder" (Mick Holder) we have a few pics from that charity trip to Morocco that Mono Pacific did in '83! THANKS!!

The trip involved three gigs for a cancer research charity - 2 nights in Cassablanca and one in Rabat.

|You are at Monopacific Live|