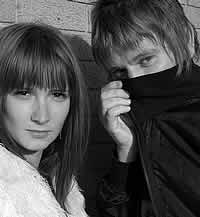 Zak Starkey and girlfriend Sshh (Sharna Liguz) create music and mayhem under the name Pengu!ns (Penguins). They began posting tracks to My Space in 2006, followed by their live debut in July 2008. (see PENGUINS)

This year, the activity seems to have increased. It began with the announcement in January that they's be opening two Beady Eye gigs in April. Zak and Sshh were interviewed for FAULT magazine (online 2001-03-20). The band's social network has moved from My Space to Facebook, they've posted a video to YouTube, and they opened two Kasabian gigs in June.

In August, a live EP was released on iTunes from the June iTunes Festival gig.

|back to Zak's work with Penguins |