Originally, Zak Starkey had been announced as being the drummer for these solo Pete Townshend appearances. But some kind of snafu prevented him from participating, and Pete proceeded make the following three appearances without ANY drummer!

[Most likely Zak's commitment to The Lightning Seeds forced him to drop out as he probably could not guarantee his availability for rehearsals or even the gigs. The 'Seeds had just released "Three Lions '98" in June, and it went to #1 thanks to World Cup frenzy, so TV appearances were up. Plus they had three big UK Festival dates just days before AND after the scheduled Pete concerts.] 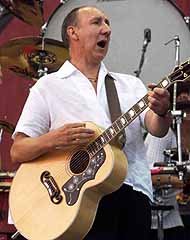 A Day In The Garden (Woodstock) Aug 15th

It was announced near the end of June that Pete Townshend would perform on the second day of "A Day In The Garden", August 15th 1998. Also appearing on the bill for that day of the three day Woodstock revisited, were Joni Mitchell, Lou Reed, Richie Havens and Donovan.

In a Reuters piece from July 24th, Pete talks about his not-so "peace & love" memories of the original gig. Zak fans were pleasantly surprised to read:
"I can tell you that he is very excited about doing this," says Socolof, adding that Townshend's band will include Ringo Starr's son Zak Starkey -- who toured with the Who during 1996-97 -- and his repertoire will feature "a significant amount" of Who material.

However, things got a bit confusing when the Boston Globe on Aug 9th, printed a piece about the show, and said that Pete was not bringing a "bassist or drummer", only to name a bassist a few paragraphs later!

On the 13th, The Boston Herald did a small bit about Pete's appearance at Woodstock, and quoted the original press release from the Day in The Garden people that said Zak would be there.

Zak did not drum for Pete at the warm up gig in Boston on the 14th. And he did not drum on the 15th at the Day in The Garden either. (Also, the bassist was actually Chucho Merchan - who had previously played w/Pete at the Brixton shows)

The day after the Woodstock gig was announced, "Pete Townshend & Friends" showed up in the Ticketmaster database. Booked the day before "A Day In The Garden" it served as a warm-up gig. There had been plenty of speculation as to who his friends would be! Turns out, the friends formed an expanded version of his past Pete / John Carin solo presentations.
The band was:
Jon Carin - Keyboards, backing vocals
Jody Linscott on percussion
Chucho Merchan - Bass
Peter Hope-Evans - harmonica
and singer-guitarist Tracey Langran.

This show surfaced on the tour database around July 24th. Turns out this was a benefit show for Maryville Academy. (The same as last year's). Tickets went on sale 10am on July 31st. The show was general admission, with tickets are priced at $175.00, and was similar in presentation to the Harborlights show.

|back to Zak's work with  Pete Townshend |