In celebration of the award nominations, Pete threw a special invitation only party, for about 500 guests, on Feb 2, 1997. The live music was performed by Pete himself, with the help of members of the Who/Quad tour band. Pete, Zak Starkey, Jodi Linscott, Rabbit, John Carron, Billy Nicholls plus 2 female backup singers, and Pino Palladino on bass, played for 75 minutes. 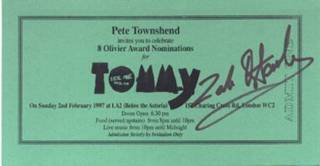 |back to Zak's work with Pete Townshend |